After a very productive but also typical trip through Thailand I needed something different. More pure, raw, and simple. I stripped down to the one outfit I was wearing, an extra sweater, my camera and a diary.  After arriving in Hanoi (Vietnam) where I was surprised with a temperature of 15 degrees and rain, I bought my HondaWin 110CC, which I called ‚Cobain‘, and attached a GoPro in front which documented my whole trip. Travelling though Vietnam was not very pleasant, the weather circumstances made it pretty hard, and also considering that I don’t own a motorbike license and have actually never driven a bike myself was quiet challenging in the beginning. But it was more the people than anything else than made me feel unwelcome. Since I did not take the common backpacker roads but decided to go off-road fairly quickly, I met with locals who were not happy to see me. The country is quite over populated in some areas, travelers are standard to them but not really liked if they don’t behave as expected and spend tons of money.

So I decided to leave Vietnam and head over through the mountains to Laos! Arriving at the border at 4pm on a rainy Saturday evening was quite risky. The officer was surprised to see me and he told me that the border was not really an international border but more for truck drivers only. I was covered completely in mud and he must have felt pity for me so I was even able to negotiate a price for a correct visa. I needed this because I obviously did not own the right currency or even enough in $. But Laos, wow! What an amazing place. Full of sun, blue sky and a temperature of 25. It reminded me so much of Nevada, Arizona, with all the open-end roads, the big naked yellow mountains, the ground red, everything just so dry. The people and the hospitality were just incredible. It is such a peaceful place, perfect to let the wind play with my thoughts and my hair, while driving Cobain and listening to all that great Cali hippy music from the music box which I built into the steering wheel. Hot long days were ahead of me. But it was definitely the best dust I got to eat except for the three daily meals of noodle soup.

Getting to Cambodia was also quite an interesting experience, crossing the border took this time five attempts. My goal on this whole trip was to be alone, breathe, think, read and not speak too much, only when I had to pull-up at a repair shop with my bike every two days, but that was obviously more sign, hand and body language than spoken words. Up until that point, I had  avoided all the big cities but skipping Angkor Wat would have been a cultural no-go. The largest temple complex in this world was build in the 13th century and is UNESCO protected. What had not changed is that it feels quite Chinese (like many areas in Cambodia because they were bought by wealthy Chinese companies) while cruising with my bike through the magical 30 square kilometer complex trying to get away from the TukTuks and Tourists. The final goal was to do a trip through the Cardamons mountains, crossing three rivers, travel up and down the rain forest mountains (with heights of between 800m – 1800m). Obviously again, as with the whole trip, was navigated using an old school map as my GPS wasn’t working. After 3000km I finally arrived the Indian Ocean, and by that time, I had become a pro at tightening my chain.

I collected 48h of video footage what will become part of an installation in the future. 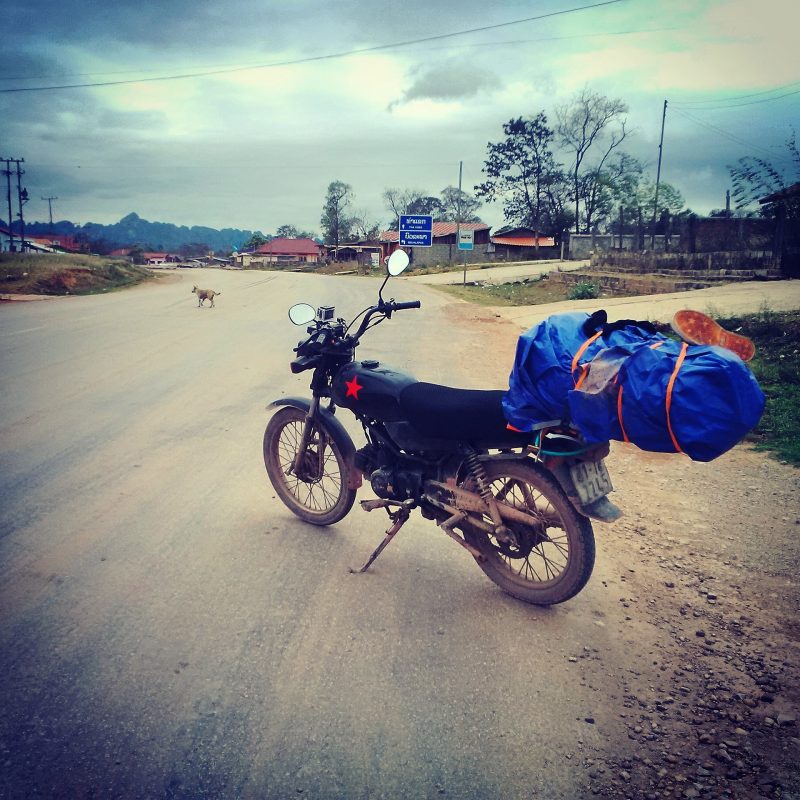 the Video to my Trip…